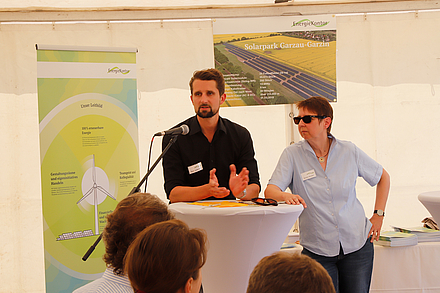 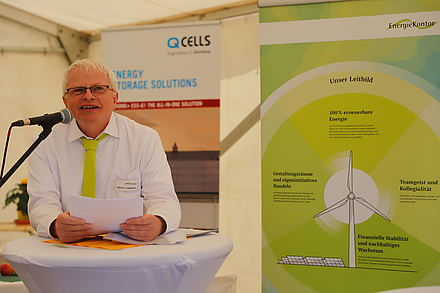 Bremen, 12 June 2018. Last Friday, Energiekontor AG celebrated the official inauguration of its first group-owned solar park in Garzau-Garzin, Brandenburg, in bright sunshine. In addition to representatives of the partner companies and banks, guests included representatives of the local authorities and municipality, property owners as well as members of the local communities.

In their speeches, the EU head of solar module manufacturer Hanwha/Q Cells, Maengyoon Kim, the Vice Director of the District Department Märkische Schweiz, Dirk Siebenmorgen, and the project manager of Energiekontor AG, Piotr Jankowski, all emphasised the excellent cooperation. Mr Jankowski expressed his thanks to the local residents as well as to the representatives of the municipality and the authorities, and praised the strong support for the project, which also stands for the contribution of the region to the general energy transition in Germany.

In his welcoming address, Günter Lammers, Deputy Chairman of the Supervisory Board and co-founder of Energiekontor, explained that the expected annual output of the entire plant of over 10 million kilowatt hours is mathematically sufficient to cover the entire electricity demand of the surrounding region. The solar park extends for several kilometres along a railway line and has a peak output of around 10 megawatts. Energiekontor is thus increasing the capacity of its own portfolio of wind farms and solar parks to around 270 megawatts. With the proceeds from the sale of electricity, Lammers continued, Energiekontor will be able to cover all running costs related to project development, which ensures financial stability for the company’s further growth. Benefiting from many efficiency measures introduced by the company and the successful efforts on the part of component manufacturers to cut manufacturing costs, Energiekontor is in a position to implement wind farms and solar parks and achieve profitability, despite the increase in competition. Energiekontor not only wants to participate in the energy transition but, in order to push forward the breakthrough of renewable energy sources, it also wants to be one of the pioneers in realising the first wind or solar parks with lower levelized cost of energy than conventional energy.

For the last 25 years, Energiekontor has stood for a sound approach to business and a wealth of experience in wind power. Formed in Bremerhaven in 1990, the company was one of the pioneers in the industry and is now one of the leading German project developers. Its core business covers the planning, construction and operational management of wind farms in Germany and abroad, and was expanded to include solar power in 2010. Energiekontor also currently owns and operates 34 wind farms and one solar park with total rated power of around 270 megawatts. Now, Energiekontor AG intends to extend its pioneering role to commercial aspects and to realise wind farms and solar parks at market prices without state subsidies in all target markets as quickly as possible.

In addition to its headquarters in Bremen, Energiekontor also maintains offices in Bremerhaven, Hagen im Bremischen, Aachen, Bernau (near Berlin), Potsdam and Dortmund. The company also has branch offices in England (Leeds), Scotland (Glasgow), Portugal (Lisbon), the Netherlands (Nijmegen), the US (Austin/Texas) and France (Toulouse). The formation of additional branch offices in France and the US is currently in the making.