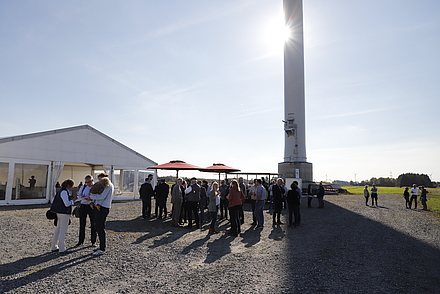 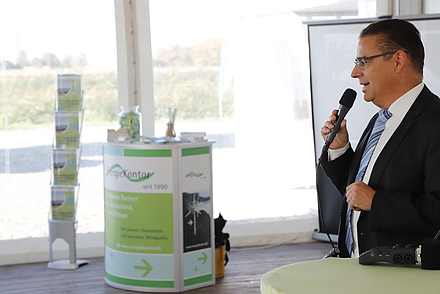 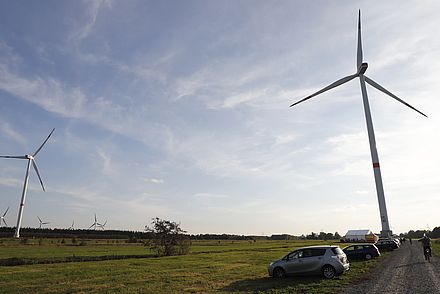 Bremen, 16 October 2018. Following inaugurations in Brandenburg and North Rhine-Westphalia, Energiekontor AG celebrated the inauguration of a wind farm at Hammelwarder Moor near Brake (Unterweser) in the key region of Lower Saxony last Friday. The wind farm consists of three 176 metre tall Senvion 3.4M114 turbines, the last of which went into operation in February 2018. With total rated power of 10.2 MW, the expected annual output amounts to approximately 26 million kWh, which would more than cover the needs of 7,000 households.

The CEO of Energiekontor AG, Peter Szabo, illustrates this number: “This amount of electricity would theoretically suffice to supply the inhabitants of the town of Brake and the community of Ovelgönne with sustainable, environmentally friendly power.” In his inauguration speech, Mr. Szabo welcomed the guests present, including members of the community and councillors, project partners and local residents and spoke words of praise for the good cooperation with those involved and local companies.

This positive cooperation was also confirmed by the mayor of the town of Brake, Mr. Michael Kurz, and the chair of the Förderverein Windpark Hammelwarder Moor (association for the promotion of the Hammelwarder Moor wind farm), Mr. Bernhard Korpis. Transparency, good communication and cooperative relationship between Energiekontor and the authorities, politicians and property owners supported the permitting process and the area development planning process. The company reacted quickly to requests and was always present.

Peter Szabo underlines, “Regionality is a principle that is very close to Energiekontor’s heart.” Szabo adds, “We want to be accessible to residents, property owners and communities so that we can act quickly and adequately to meet their needs.” By involving local companies, part of the value also remains in the region.

Szabo further explains that at an average of 7.68 euro cents/kWh, Hammelwarder Moor is one of the last Energiekontor projects to be remunerated according to the old EEG tariff. In Germany, the remuneration prices for electricity from onshore wind farms have been determined in auctioning procedures since 2017. In Great Britain, the company is currently realising the first subsidy-free wind farm based on power purchase agreements with large industrial customers, so-called PPAs. The CEO predicts that in Germany too, such PPAs will start to form the basis for the implementation of wind and solar projects outside of the German Renewable Energy Sources Act (EEG). Energiekontor considers itself to be a pioneer and wants to realize the first wind farms and solar parks with a levelized cost of electricity that is below that of fossil fuel and nuclear power plants.

For the last 25 years, Energiekontor has stood for a sound approach to business and a wealth of experience in wind power. Formed in Bremerhaven in 1990, the Company was one of the pioneers in the industry and is now one of the leading German project developers. Its core business covers the planning, construction and operational management of wind farms in Germany and abroad, and was expanded to include solar power in 2010. Energiekontor also currently owns and operates 34 wind farms and one solar park with total rated power of nearly 270 megawatts. Energiekontor AG now also intends to be a pioneer when it comes to economic viability in realising the first wind farms and solar parks at market prices without state subsidies in all target markets as quickly as possible.

In addition to its headquarters in Bremen, Energiekontor also maintains offices in Bremerhaven, Hagen im Bremischen, Aachen, Dortmund, Bernau (near Berlin) and Potsdam. The company also has branch offices in England (Leeds), Scotland (Glasgow), Portugal (Lisbon), the Netherlands (Nijmegen), the US (Austin/Texas and Rapid City/South Dakota) and France (Toulouse). The formation of an additional office in France is currently in the making.