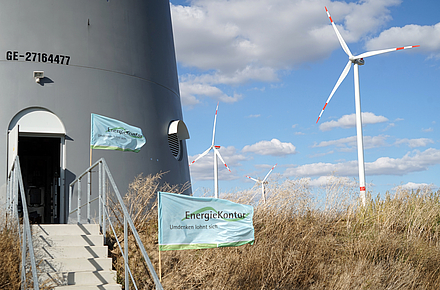 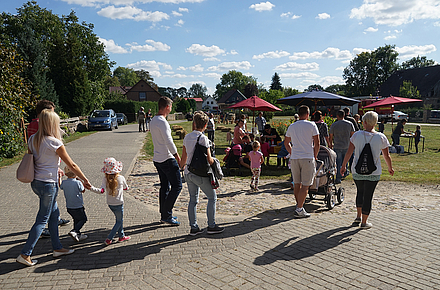 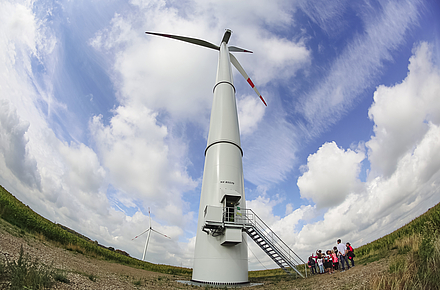 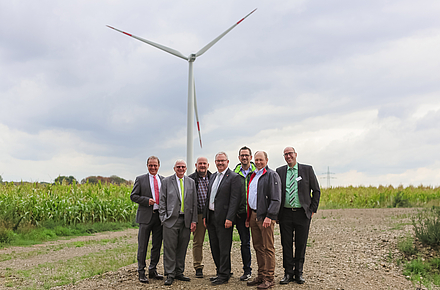 Bremen, 26 September 2018.In the past two weeks, Energiekontor AG has celebrated the inauguration of three wind farms. In North Rhine-Westphalia this refers to the Heinsberg-Waldenrath (7.3 MW) and Niederzier-Steinstraß (8.3 MW) wind farms, which became part of the Company’s own portfolio at the end of 2017. The celebrations in Brandenburg took place at the Luckow-Petershagen wind farm (13.75 MW), where four 2.75 MW turbines had already been put into operation at the end of 2015. The fifth turbine was completed at the end of 2017.

Nordex, Senvion and GE turbines with hub heights between 91 and 139 meters are in operation at the three wind farms. In total, the wind farms generate approximately 75 GWh of electricity per year, which corresponds to the needs of more than 20,000 households. Thus, the wind farms could theoretically supply sustainably generated electricity to their surrounding area, the city of Heinsberg, the municipality of Niederzier and the Garz (Oder) district.

In addition to the mayors and representatives of the communities and neighbouring communities, residents and their families, as well as pre-school children and school classes were warmly welcomed to the celebrations. In their opening speeches, the Management and Supervisory Boards of Energiekontor AG emphasized the importance of constructive cooperation with regional decision-makers and local construction companies. They also underlined that the company attaches great importance to the acceptance among local residents. Because Energiekontor stays involved beyond the construction phase by taking over the operational management or even by operating the farm as part of its own portfolio, the construction of a new wind farm means that Energiekontor and the local people will be working together for several decades.

Therefore, the locals benefit financially from the operation of the wind farms as the property owners and Energiekontor pass part of the annual electricity revenue directly on to local associations and non-profit institutions as well as regional projects. This is how Energiekontor would like to let a larger part of the population participate in the economic success of the wind farms. In Luckow-Petershagen, for example, the money was used to expand a playground. The Heinsberg site supports the local Waldenrath and Straeten associations, which have already started to implement several local projects and are planning numerous other projects. And in Niederzier, funds were used in 2017 and 2018 to support youth clubs, the holiday program for children, altar server groups, the renovation and furnishing of a church, a weekend for choir members and a children's day care centre. The property owners and Energiekontor promote the local charity projects on an annual and therefore sustainable basis.

Günter Eschen, member of Energiekontor’s Management Board, underlines the regional approach: “Energiekontor has always paid great attention to regional ties, which allows us to cooperate closely with the municipalities and to involve local people in the projects. Being close to the relevant stakeholders is of utmost importance to be able to understand local circumstances and needs, and to establish a direct network of relationships with property owners and authorities. At the same time, our tailor-made regional approach with high local acceptance generates competitive advantage.”

Günter Lammers, co-founder and Deputy Chairman of the Supervisory Board at Energiekontor AG highlights the strategic-visionary direction: “The income from the sale of electricity in all of the Group-owned wind farms enables Energiekontor to cover the entire running costs of project development. This ensures the company is financially stable, making way for further growth. Energiekontor pioneers the realisation of the first non-subsidised wind farms by concluding long-term power purchase agreements, so-called PPAs. Thanks to a variety of efficiency measures, the safeguarding of our project pipeline by means of package deals with turbine manufacturers and by positioning ourselves in several target markets, Energiekontor is in a position to implement wind farms and solar parks profitably despite increasing competitive pressure. Our vision is a world using 100 percent renewable energy. To achieve this, Energiekontor intends to realize wind farms and solar parks with a levelized cost of electricity that is below that of conventional power plants.”

For the last 25 years, Energiekontor has stood for a sound approach to business and a wealth of experience in wind power. Formed in Bremerhaven in 1990, the Company was one of the pioneers in the industry and is now one of the leading German project developers. Its core business covers the planning, construction and operational management of wind farms in Germany and abroad, and was expanded to include solar power in 2010. Energiekontor also currently owns and operates 34 wind farms and one solar park with total rated power of nearly 270 megawatts. Energiekontor AG now also intends to be a pioneer when it comes to economic viability in realising the first wind farms and solar parks at market prices without state subsidies in all target markets as quickly as possible.

In addition to its headquarters in Bremen, Energiekontor also maintains offices in Bremerhaven, Hagen im Bremischen, Aachen, Dortmund, Bernau (near Berlin) and Potsdam. The company also has branch offices in England (Leeds), Scotland (Glasgow), Portugal (Lisbon), the Netherlands (Nijmegen), the US (Austin/Texas and Rapid City/South Dakota) and France (Toulouse). The formation of an additional office in France is currently in the making.